Stephanie Morrill's latest book, The Lost Girl of Astor Street, releases today! It's a very exciting event, all around. I was lucky enough to have the chance to read the book ahead of time, and it is fabulous. It's going to be a hit, I'm sure, and you should definitely check it out. This is both stop #23 and stop #24 on the clue hunt celebrating the release. This stop's clue will appear in bold at the bottom of the post. If you've gotten lost along the way or want to start from the beginning, here's the complete list of stops.

Clue 2: Some Books Are

I'm a history lover, so, instead of a book review, I decided to introduce you to some of the history of the period.

Lost Girl is set in 1924 Chicago. This period, known as the "Roaring Twenties," was a time of great prosperity, energy, and change in the United States. Following the end of World War I in 1919, people felt that they were entering a period of worldwide peace. WWI was considered by people of the time as "the war to end all wars." The end of the war led to a new era in America.

This was also the time of Prohibition. In 1920, the 18th Amendment to the Constitution went into effect, making the brewing and sale of liquor illegal. It came after decades of a movement to ban alcohol. Many states had already banned it by the time the federal government put it into effect. It would later be repealed by the 21st Amendment in 1933. In the meantime, though, the entire United States was technically a "dry" country. Those who could afford it largely ignored the law, and a thriving bootleg industry rose up, creating the era of gangsters like Al Capone.

There was a tremendous flood of immigration to America in the decades between 1880 and 1920, making U.S. cities explode in population and, over time, erupt in gang violence largely drawn along ethnic lines. Chicago, where Lost Girl is set, was no exception. Irish and Italian gangs play a role in that story. Interestingly, 1924, the year this story is set, was the year when immigration began being restricted with the Johnson-Reed Act.

The years between the Civil War and WWI were a time of huge change for Americans. The Industrial Revolution resulted in a huge number of new inventions – such as the transatlantic cable in 1866, the telephone in 1876, the electric lightbulb in 1879, and the famous Model T Ford in 1908. During this era, factories became a big part of urban life, and huge numbers of people moved from American farms to cities, seeking work in those factories. Women and children often worked in these factories, and poverty ran rampant through the tenement slums of big cities. 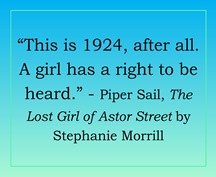 For the middle-class and wealthy, though, the Roaring Twenties were a time of experimentation and new horizons. Also known as the Jazz Age, this time period was characterized by a release of inhibitions and an embrace of newness. The 20s are famous for two dances: the Lindy Hop and the Charleston, the latter of which actually became popular just after Lost Girl. The "flapper" is a particularly strong image from the period – a young, independent woman with bobbed hair and short skirts.

The movies of 1924 were all silent and included The Iron Horse, with George O'Brien, and The Thief of Baghdad, with Douglas Fairbanks. Movie stars of the 1920s included Fairbanks, Buster Keaton, Charlie Chaplin, Greta Garbo, Rudolph Valentino (mentioned in Lost Girl), and Mary Pickford.

The top songs of 1924 were "Rhapsody in Blue" by George Gershwin, "It Had to Be You" by Isham Jones, and "California, Here I Come" by Al Jolson. Popular musicians of the 20s as a whole included Jelly Roll Morton, Louis Armstrong, Eddie Lang, and Duke Ellington.

I hope you've enjoyed this glimpse into the history of the 1920s. The Lost Girl of Astor Street is a fabulous book set in the period, and I highly recommend that you go out and buy it right now!

For those of you participating in Stephanie Morrill's clue hunt, Clues # 23 & #24 are "history or". You can find the 25th (and final) clue on Roseanna White's blog.

Did you know this stuff about the Roaring Twenties? What periods of history do you love learning about? Let me know in the comments!

Posted by Rachelle O'Neil
Email ThisBlogThis!Share to TwitterShare to FacebookShare to Pinterest
Labels: Movies and Books

Hey, there! I love comments, and I'm always quick to respond. Got something to say?